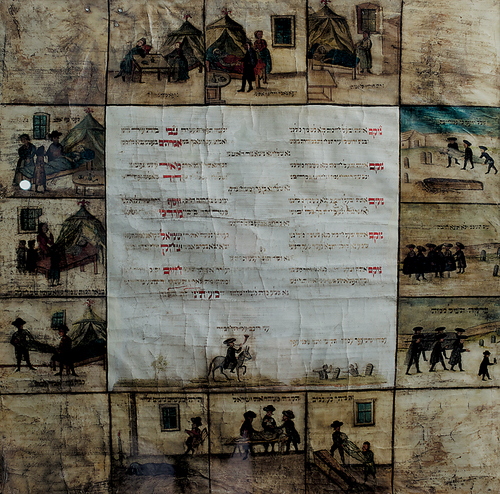 This is a memorial page showing the services of the Hevra Kadisha, and it was made in 1800 in Gyöngyös. In the middle of the parchment the inscription contains the names of the officers of the Hevra Kadisha in rhyme. Surrounding the text there are twelve pictures of death and burial. The pictures follow each other according to the direction of Hebrew writing, from right to left, starting from the picture in the upper right corner – the sequence of events can thus be followed in an anti-clockwise direction. The three pictures on the top show scenes of illness: wife at her husband’s sickbed, physician visiting the patient, and the recovery of the patient. On the top picture on the left hand side, the patient is in bed again, surrounded by men in the traditional clothing of the time: the members of the Hevra Kadisha visit the sick and pray together, which is implied by the prayer book in the hand of the man on the right. The picture underneath shows the point of death, as the inscription says. The next picture shows how two men in a hat place the corpse on the ground, as it was customary at the time. In the bottom row, on the first picture the corpse is covered by a sheet, and a candle burns next to the head; the appointee of the Hevra keeps vigil, guards the corpse and recites prayers and psalms. The middle picture shows the ritual washing of the body called tahara: one man stands at the head of the corpse, one at the foot, and one in between, and they wash the corpse. Then the corpse is dressed in a white shroud and placed into the coffin, which is shown on the picture on the right. On the right hand side of the parchment, on the bottom picture, members of the Hevra Kadisha carry the coffin on their shoulders to the cemetery, and one member walks in front of them with a charity box in his hand. The last two pictures attest to a burial practice that was discontinued in the nineteenth century: the corpse is lifted from the coffin, and then, as seen on the last picture, it is buried in the grave without the coffin, in the shroud. This ancient custom was terminated after the requirements of health authorities in modern states prescribed the use of coffins for burial. In the middle of the picture, underneath the poem there is a depiction of the forerunner of the Messiah riding a horse or a donkey, and to his right, of the resurrection promised after the coming of the Messiah: figures wearing a shroud appear from the ground next to the gravestones. 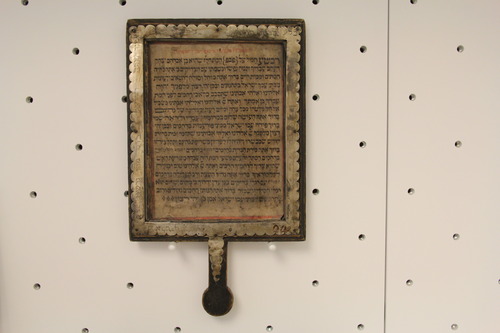 Prayer board. Washing the dead is a ritual task, during which many blessings and prayers are recited by those who wash the body. Because their hands are unclean due to the contact with the dead body, they use framed prayer boards instead of prayer books. Beside the names of the donors, a quotation from Isaiah can be read on the rim of the silver frame: "He will swallow up death forever." Óbuda,1806 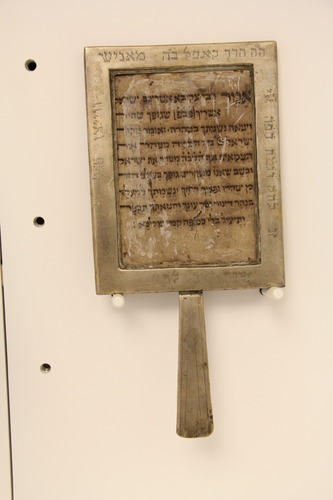 Jewish funeral customs stress that all people in death are equal. The body is dressed in simple burial shrouds and put to rest in a simple wood casket. In the pre-modern age, guardians and those who performed the ritual washing and dressing of the corpse were chosen by lot from among the members of the chevra kadisha, the burial society, thus assuring equality in death for anyone. 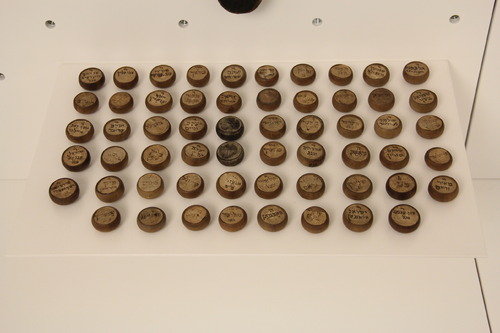 Chevra Kadishas, the holy societies of burials, are the elite bodies of the jewish communities where becoming a member is a voluntery step that comes with great appreciation and serious finincial sacrifices.Services around the dead are major good deeds, and in the premodern ages they were performed by the members themselves. In traditional communities, besides those who washed the bodies, other members of the community were chosen to pray and be watchers by lottery. The small wooden balls, on which the names of the Pesti Chevra Kadisa members are written on parchment, are the reminisences of this practice. 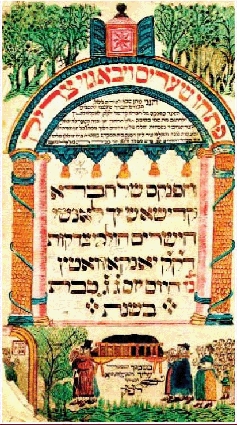 Chevra Kadisha record book of Jánoshalma, 1802. The local statues, the name lits of the members and the accounting of Chevra Kadishas were written in an ornately elaborated record book, a pinkas-a Hebrew term which they got from the Greeks. The title page of the Chevra Kadisha record book of Jánoshalma follows the gate-shaped ornamentation typical in Hebrew books in the 18-19th Centuries.Within the ornament the title of the record book can be read, which is the name of the settlement in it's locally used version: Jankovac.In the painted burial scene on the lower third of the cover we can see that members of the Chevra Kadisha carry the dead person to the cemetary on their shoulders, while there is a man holding a prayer board in front of them.This imagery is the reminiscence of the old practice that was abolished by the regulations in public health in modernizing states ,where the dead were buried without a coffin, lying on a simple board. 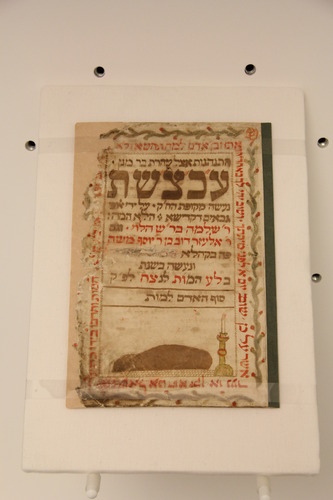 Prayers and blessings for washing the dead. According to Jewish tradition the body of the dead was covered with a sheet, candles were lit at the head of the deceased and the members of the holy society were praying and watching over the body overnight. The next morning, following strict regulations, 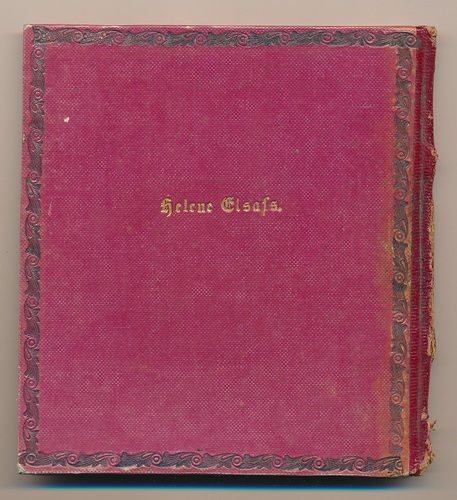 Tahara (ritual cleaning of the dead body) prayer book for women. The small, manuscript parchment prayer book contains the prayers that are to be recited during the ritual cleaning and customizing of the deceased women. Along with dead women, this was performed by other women, including the recitation of the required prayers. This prayer book was made for Henle, the widow of Johanan Elzasz in Frankfurt am Main. Frankfurt,1833. 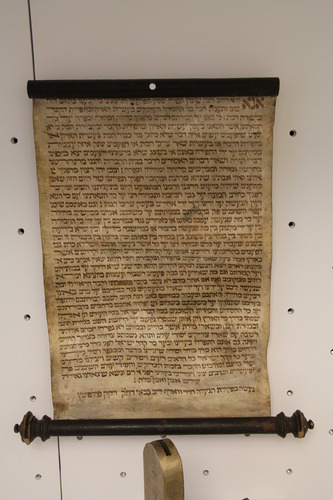 Prayers. Prayers to be said in the cemetary. Felpéc, 19th Century. 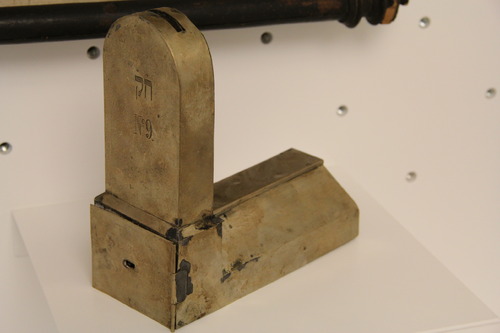 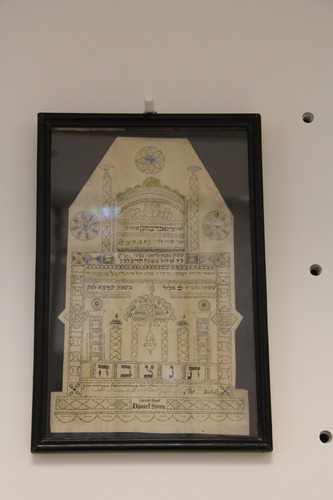 Small Jahrzeit board. In Jewish tradition it is customary to commemorate your loved ones on the anniversay of their death (in judendeutsch named Jahrzeit). In order to fix the dates, and to have them preserved for the family's recollection, it has became a custom to put down the dates of the deaths. Miskolc, 1831 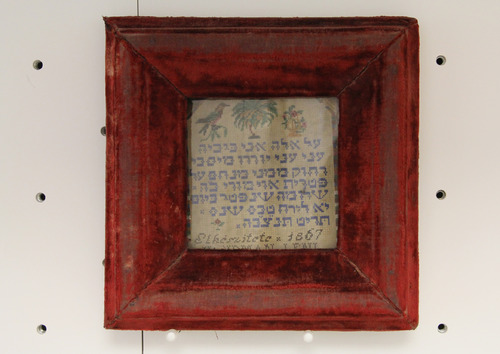 Jahrzeit board, 1867. Leni Waldmann embroided it on a piece of cardboard, in memory of a relative, for her own comfort.

In Jewish tangible culture, the depiction of corpses is quite unusual. Nevertheless, we can see here two versions of it.  On a death calendar made in 1858, the interred body of the deceased mother, Gitl is visible. A commemorative volume of the community of Bonyhád, prepared in 1945, shows unburied piles of corpses of those killed in forced labor and concentration camps. 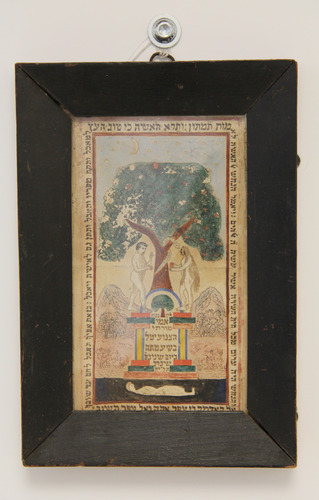 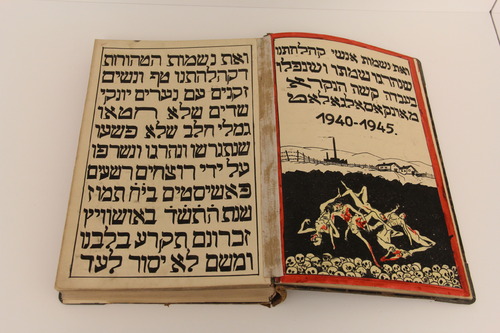 Memory book. In Bonyhád there was a presigious Jewish community in the 18th century. After the extermination of the major part of the community, those who returned reestablished the community by 1949, and recorded the names of the dead members of the community in a memory book - following the medieval practice of writing memorbuchs. In the fourth line of the Hebrew text on the introducory page that lists those who died in labour service, the word labour service was written in Hungarian but with Hebrew letters since no suitable term could be found in Hebrew. The picture below the text indicates that the creator of the book had seen the photos that were taken during the excavation of the mass graves at concentration camps and labour camps.

"Tzedakah saves from death". It holds true in two respects.  It may mean survival for those in need, and the donor may also leave a trace behind. Prior to the emergence of social welfare systems, it assured dignified care for each member of the community. 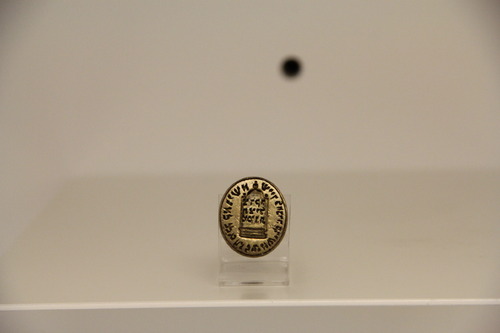 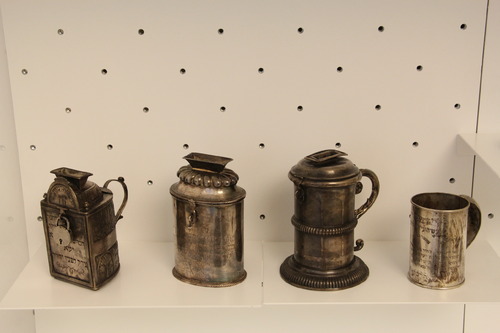 Charity boxes. A lot of money was needed to ensure the burials, and the minimum care of patients, orphans and widows. This money was covered by charity donations -tzedakah- collected from all members of the community. The donations were collected in sealed boxes and were handled by the community's charity magistrates.It was customary, however, to place open charity boxes resembling a tray in the house of the mourners.Everyone could put money in them and the mourning family could take out as much as they needed.During the mourning period the money in the boxes was not counted.Thus, aid was almost invisible, in accordance with the ancient Jewish principles. How much money was put in and how much was taken out remained unknown.At the end, what remained was put in closed chevra boxes. 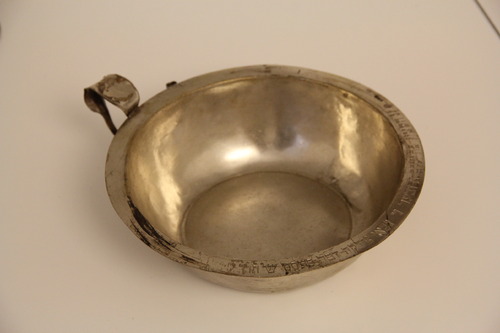 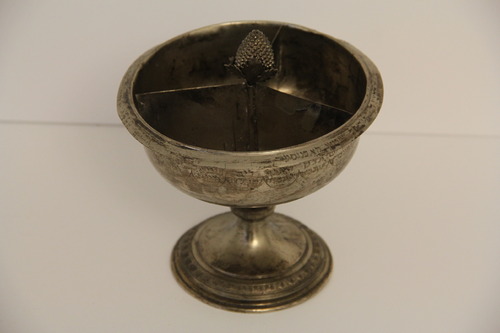 Charity box. Everyone is invvolved in the extensive social network: those who can afford to donate may support the work of aid associations, while those in need may get to a position with their help where they can donate. It was possible to donate to a ariety of purposes with the three-section charity box of Óbuda, that was made in 1841. 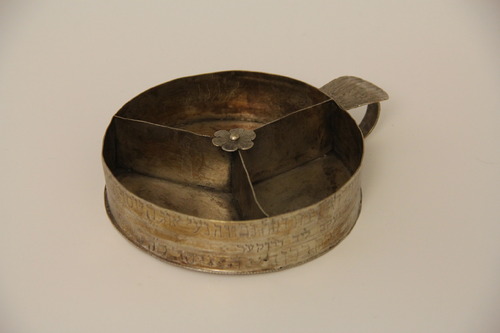 Triple charity box. In this box, charity, educational and general donations could be collected according to the inscriptions on each field. Óbuda, 1928. 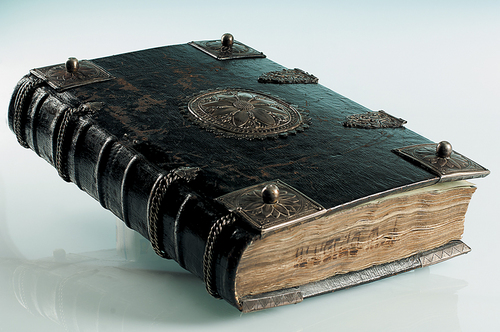 The Jewish communities established in Hungary in the eighteenth century maintained several organizations and societies, but the Chevra Kadisha, responsible for the ritual burial of the dead was the most common among these. The tasks of the Hevra Kadisha are defined by religious law, but the specific statutes and regulations of each Chevra Kadisha were always adjusted to local traditions. The statutes, the names of the members, and the bookkeeping were often written in ornate minute books. This minute book of the Hevra Kadisha of Nagykanizsa was used between the years 1769 and 1793, and besides the above mentioned, it also contains sections from rabbinical works dealing with the burial of the dead. The quotations from the tractate about hell from Sefer hasidim are illustrated here with ten pictures depicting rituals related to the dead and to burial and the purification of the guilty. The pictures accurately show the typical Jewish clothing of late eighteenth century Hungary, as well as contemporary ideas of hell, angels or the purgatory. Besides these pictures, all 299 pages of the book are richly decorated on the margins. The illustrations were made by Yitzhak Eisik of Kabold (today Kobersdorf, Austria), who is known as the illustrator of several books from western Hungary.