Brit milah, the covenant of Abraham (circumcision) is a link connecting the past, present and future of the Jewish people.  Abraham is the past, those gathering to participate at the circumcision ceremony is the present, while the immortal prophet, Elijah who is the harbinger of the Messiah represents future. He takes, symbolically, the chair on the right side, next to the man holding the baby who is called kvater. 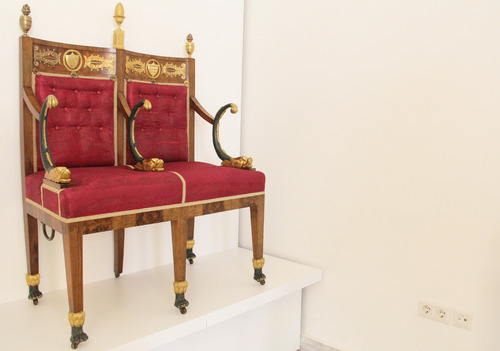 Circumcision Chair: This type of double chair is a widespread piece of furniture among Ashkenazi Jews, (in Eastern Europe largely), used for the ceremony of circumcision. According to the Torah, there are two signs of the commandment between God and the Jewish people: the observance of the Shabbat and the circumcision of infant boys on the eighth day after their birth. The rituals of the circumcision ceremony developed on the one hand as a result of strict and careful rabbinic rulings, and on the other hand from superstitions and legends. Traditionally, the godfather (kvater or sandek) sits on the left, holding the infant in his lap, while the other seat is reserved for Eliyahu (the Prophet Elijah), who is thought to protect the infant and supervise the ceremony. The figure of Eliyahu is closely connected to the events of birth and circumcision in Jewish tradition. His presence wards off evil, malicious demons. The double chairs of Eliyahu have been common items of furniture in synagogues. Their design and style represent typical furniture art of the period the chair was made. Such double chairs have been in general use in Hungary until the end of the 19th century, when state health authorities started to pay more attention to births and events related to it, and wanted to make compulsory the supervision of official midwives during circumcision ceremonies. 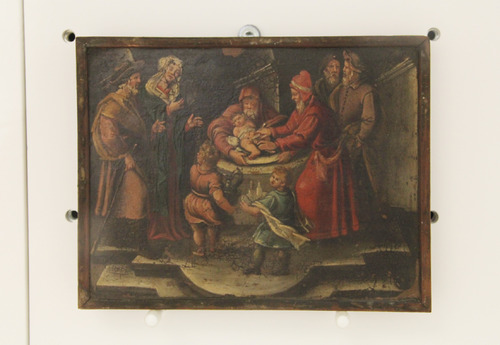 Scene of circumcision painted on wood. 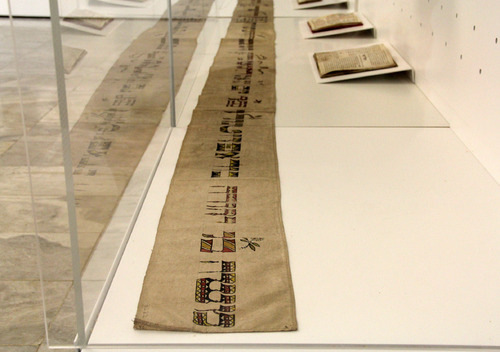 Torah binder (Wimpel): The custom to use Torah binders was adopted by Ashkenazi communities and we have evidence of it from the 16th century onwards. The swaddling of the newborn boy, used at the circumcision ceremony, was cut into four strips that were sewn together into one long band and embroidered. It was then donated to the synagogue upon the boy’s first birthday, which was used to bind the Torah scroll. The inscriptions of the Torah binders are identical, apart from minor variations: “N., the respectable NN’s son was born under a fortunate star on the day of the week, day-month-year.” The second part of the inscription contains a benediction that echoes what is recited during the circumcision: “May the Lord grant that he grows to the Torah, the chuppah, and good deeds.” The letters were drawn by an experienced scribe, then it was embellished with flowers, plant motifs, geometric shapes, and crowns over the letters by the embroiderer. 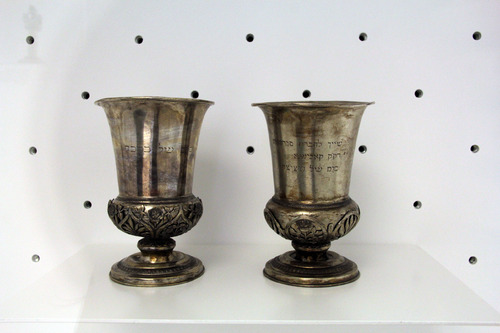 Pair of cups. Cups used at the circumcision ceremony.

God’s intention was to create the universe not completely finished, in order to allow for us, his creatures, to become his partners in perfecting and mending it. Circumcision is performed on an eight-day old male baby; it is an introduction into our traditions, a preparation for the exercise of the commandments, and is an eternal reminder of who we are. 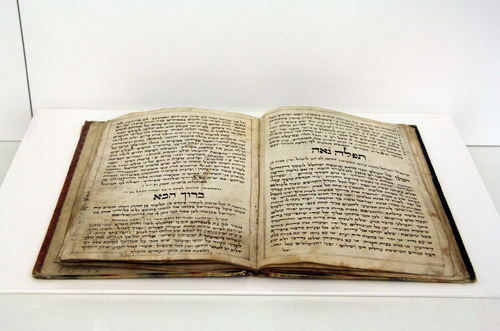 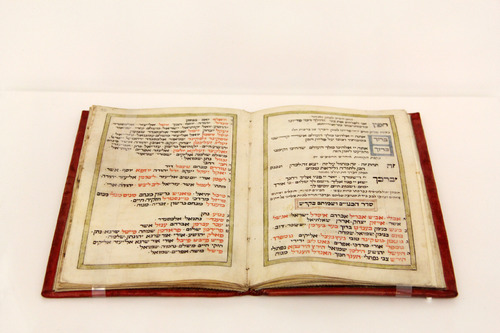 Circumcision book. 1832. In the circumcision book of Csév Hebrew names together with their correspondong Yiddish names are listed. This was necessary because the traditional Jewish naming practice of the newborn child could not get the name of the living parent or grandparent, but the name correspondences were not known to everyone. The Yiddish names were written in red, and next to them, the Hebrew names that were considered to be identical were listed in black. 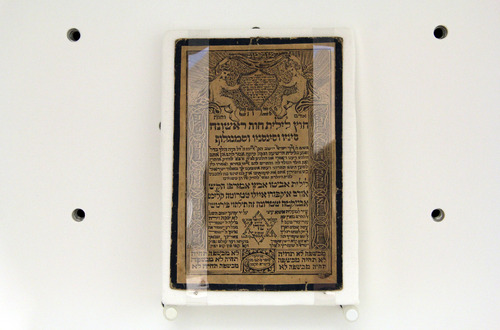 Childbed plaque. According to medieval Jewish legends, Adam’s first wife was Lilith, but she fled from him and bowed herself with the devil. In the stories, Lilith marches with host of demons and kidnaps newborn infants. It was customary to hang a paper-cut amulet or plaque in the room where the pregnant woman laid, which served to protect the expectant mother as well as the newborn from Lilith, the dangerous demon. These plaques are full of protective texts and illustrations. The childbed plaque (also known as kimpet-tsetl, from kimpet, which in Yiddish means childbed) made in Nitra, in 1854, is the work of Mordehai Sofer, a renowned copperplate engraver.