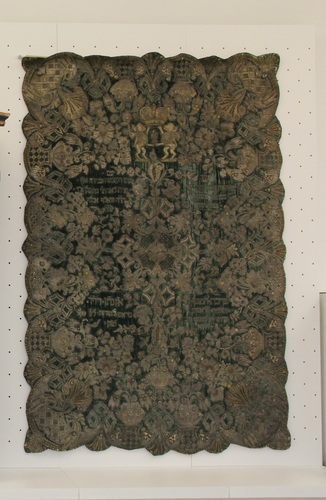 Torah Ark Curtain from the Óbuda community. The Torah ark curtain (parochet) separates the Torah ark placed in front of the east wall of the synagogue from the rest of the building. According to its inscription the curtain made of metal-stitched embroidery was donated by Boskowitz Wolf to the synagogue in 1772, yet local tradition claimed that the material of the curtain was donated to the community by Queen Maria Theresa. Since the curtain is one of the earliest relics of the present Jewish community in Budapest, it was held in high esteem and borrowed on numerous occasions for solemn ceremonies of the Pest community, thus ensuring the historical legitimacy of the community. 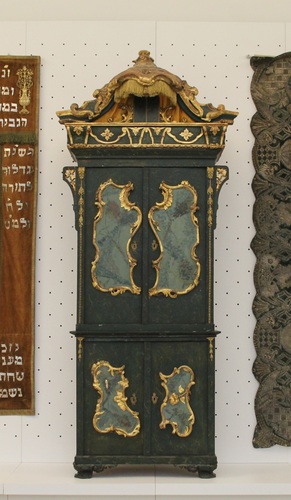 The Torah ark is an ornamental closet that contains the Torah scrolls, the most holy items of Jewish religion. According to tradition, the Torah ark is placed in the part of the synagogue that is closest to Jerusalem, that is, on the eastern side of the sanctuary. The Torah scrolls were placed in the upper part of this closet, and the lower part served for the storage of other sacral objects. The Jewish community of Kittsee was one of the “sheva kehillot”, the seven communities that were established on the estate of the Esterhazy family in Western Hungary, today in the territory of Burgenland, Austria, based on a privilege of the Duke Esterházy. In the seventeenth century, when Jews were forbidden to settle in most Hungarian towns, they received special privilege from the Duke Esterházy to build houses and synagogues, and to maintain various institutions needed for Jewish communal and ritual life, such as a ritual bath, school, kosher butchery, wine-shop. The community had quite extensive autonomy, and had the right to choose their own rabbi and prefects, albeit with the approval of the landlord. From the outside, this Torah ark resembles general furniture art of the period. Its manufacturer might have been a carpenter working for the court, as it was probably also court craftsmen who built the synagogue of the town. 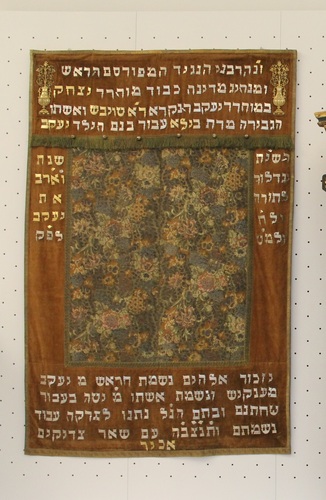 Torah Ark Curtain, 1830. The ornaments on the Torah ark curtain of Polish origin are the inscriptions on all four sides of the frame. The letters are cut out of silver plate. The text captures the name of the donators and the occasion: Jákob’s son, Izsák Taubes and his wife Bella, donated to the community in 1830, on the occasion of the birth of their son, Jakab. Along with the birth of their son, the couple also commemorated the deceased parents of Bella: Lord, remember Jakab Menkes and his wife, Jetti, for whose salvation/ soul their daughter and son in law made this donation. The valuable object was given to the collection in 1912 by József Hatvany, president of the Israelite Hungarian Literature Society, who founded the Museum.