After liberation from slavery in Egypt, our ancestors wandered in the desert for forty years and lived in temporary dwellings. Sukkot, or the Feast of Booth is a seven-day long holiday, commemorating the Exodus.  As a most important practical rule, a sukkah or booth is to be built and a bouquet consisting of four plants needs to be obtained. Traditionally, the building of the sukkah commenced after Yom Kippur to serve for many as a temporary dwelling throughout the holiday of Sukkot.  Others only ate meals in the sukkah, constructed either in the courtyard of synagogues or, less frequently, in their own gardens. According to rabbinical traditions, on each day of the holiday, special guests (ushpizin) also arrive to the sukkah: Abraham, Isaac, Jacob, Joseph, Moses, Aaron and David each visit the sukkah. 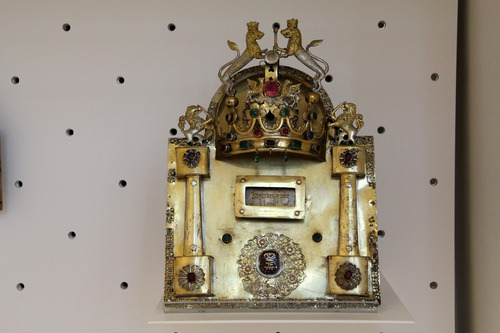 Torah Shield with plaque indicating the holiday of Sukkot. The Torah scroll, from which the festive Torah portion was read aloud, was decorated with this Torah shield for the synagogue service on Sukkot. On the other side of the plaque is the name of the feast of Simchat Torah. This holiday following the eight days of Sukkot announces the completion of the Torah reading and its new beginning. That is celebrating the completion of the year’s cycle of readings. The Torah shield made in 1791 was originally used in one of the Tzfat synagogues. Situated on the highest point of the Galilee, Tzfat (Safed) is one of the cities in the Holy Land, where a significant Jewish community has been present from ancient times. From the early modern period the town is center to Jewish mystical teachings and of the Kabbalah. 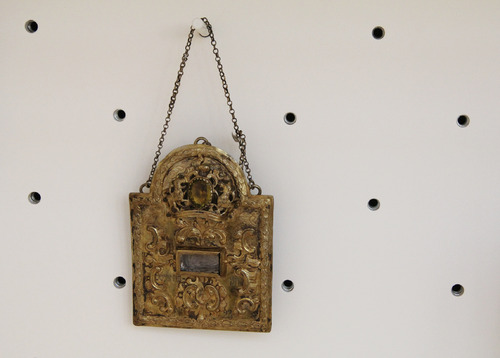 Torah Shield for Sukkot. In the first half of the 19th century, this relatively simple and small Torah shield was commissioned by the Chevra Kadisa of Pest. 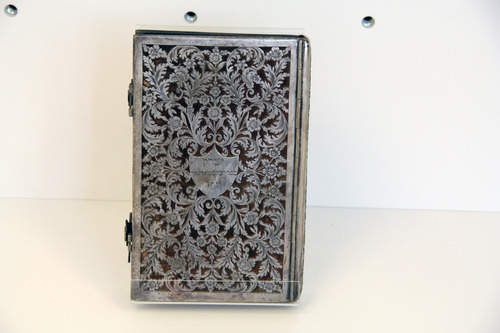 Prayer Book for the Pilgrimage Festivals. Prayer book for the three Pilgrimage Festivals: the holidays of Passover (Pesach), Shavuot, and Sukkot. The reason for calling them pilgrimage holidays comes from the ancient world. During the Temple period the people of Israel made pilgrimage to Jerusalem on these festivals, in order to celebrate the holiday together in the Temple of Jerusalem as prescribed in the Torah. The book embellished in ornate silver binding was printed in 1844, in Vienna.

The sukkah decoration on display was added to the collection in 1943; it was used before for many years. In our climate, it often rains already during Sukkot; the traces of rain can be detected on this embroidered textile. We conserved the object, but did not erase the memory of time, as they remind us to the wandering in the desert. 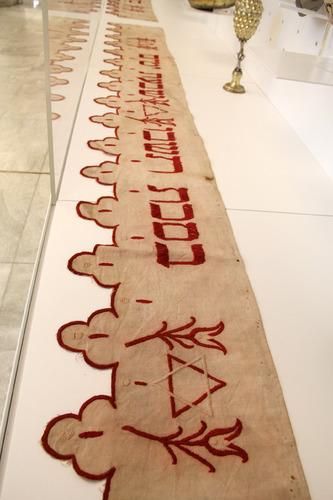 Sukkah decoration. It is to commemorate the commandment of Sukkot that a periodic tent-like structure is built for the time of the holiday, which is often decorated. The inscription on the embroidered drapery that used to decorate a booth says: “You shall live in booths seven days; all citizens in Israel shall live in booths” added by an excerpt from the prayer book: “And cover us with the tent of peace”. 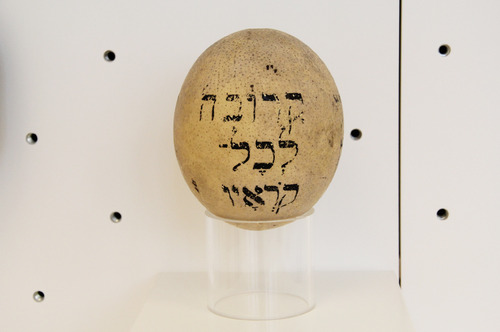 Sukkah decoration made of ostrich egg. Among the Sephardic Jews, the ostrich egg has a symbolic content. The reason for this is that according to beliefs looking in the big eyes of the ostrich helps concentrate on prayers and the egg itself is similar to the ostrich’s eyes. It was customary, therefore, to also decorate the synagogues with empty ostrich eggs, which also appeared in the decoration of the booth of Sukkot. According to the quote from Psalm 145, verse 18: “The Lord is near to all who call Him, to all who call Him with sincerity.” The ostrich egg was donated by a family of Sefard origin from Budapest. 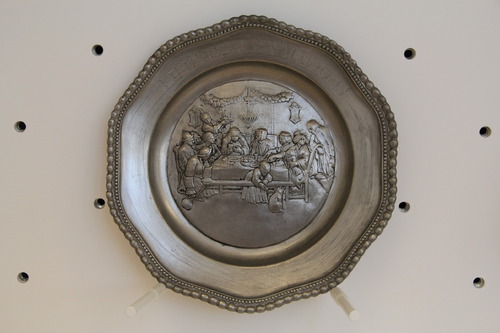 Pewter plate with scene of Sukkot. Two weeks after the Jewish New Year, the Feast of Tabernacles, in Hebrew Sukkot begins. The period of eight days of celebration recalls the forty years of wandering in the desert after the Exodus from Egypt. During the holiday, it is customary to eat in the sukkah, that is the tent or booth. The embossed picture on this pewter plate, which follows Oppenheimer's depiction, portrays the festive meal eaten in the booth. 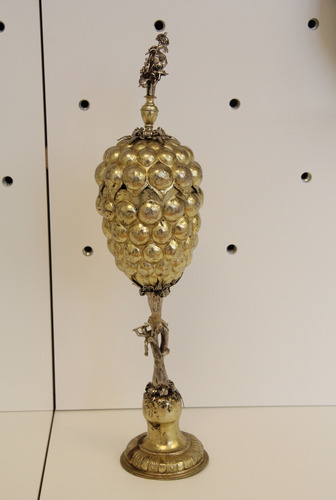 Kiddush cup for Sukkot. This goblet was used at dinners on Sukkot.

Beautification of the mitzvah

In order for an etrog, used as one of the four species for Sukkot, to be kosher it must have an intact stem, therefore they are usually placed in protective cases. These boxes can be made of any material, there are no rules as to their shape or material. Hiddur mitzvah, the beautification of the mitzvah especially applies to the etrog; to use the largest etrog and the most artistic objects in order to fulfill and beautify the mitzvot. 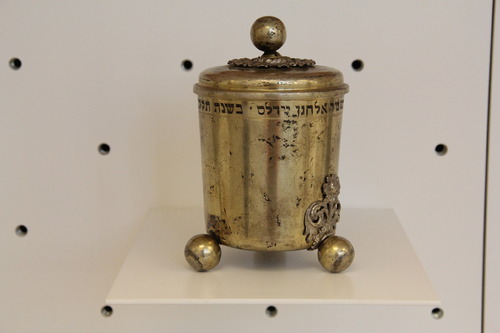 Lidded cup. Etrog is a lemon-like fruit in the bouquet of four plants for Sukkot holiday. The Etrog is only kosher for ritual use when its tip is intact, so it must be stored very carefully, cautiously. The container can be anything. Elhanan Jidels donated the ceremonial cup made much earlier to the Chevra Kadisha of Pest in 1819, which could have likely be used as an Etrog container. 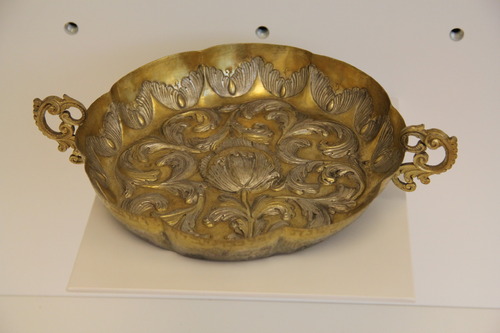 Etrog Container Plate. Presumably originally it was used as a wine tasting bowl but in Nagykanizsa the flat, gold plated silver bowl served as an etrog container. 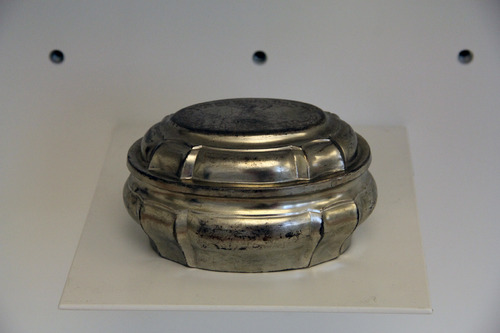 Etrog Container. The little silver box made in 1744 was originally a sugar container most likely, but was used as an etrog container by a Jewish family, and was donated to the collection as such in 1911. 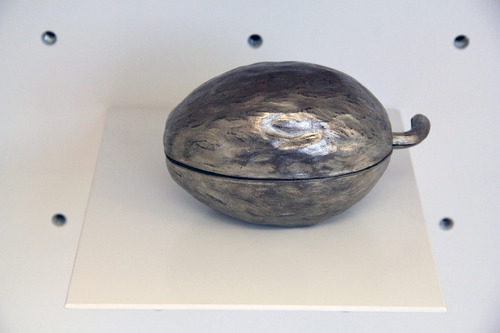 Etrog Container. In the 17th century appeared the containers specially made for etrog, following the shape of the fruit. 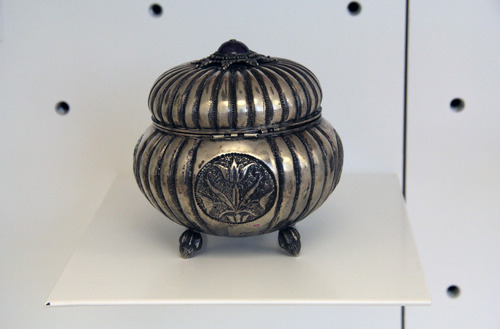 Etrog Container. This art deco style box, made in 1924 was used as an etrog container.

Etrog Container. The simple tin box was made specially for etrog in Lemberg. The text of the blessing on the festive bouquet, the Lulav, on the side of the box indicates this. Inside the box remained the hemp tow, which protected the etrog. 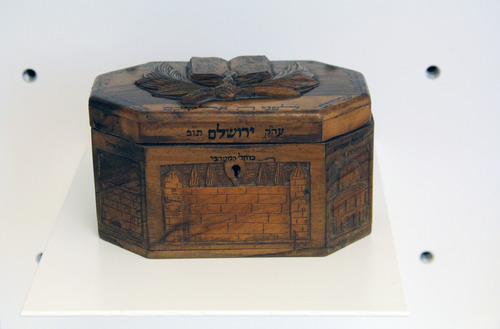 Etrog Container made of cedar wood. The blue silk-lined box was made in Jerusalem; on the sides, depictions of the Wailing Wall, the Temple Mount, and Rachel’s tomb can be seen. 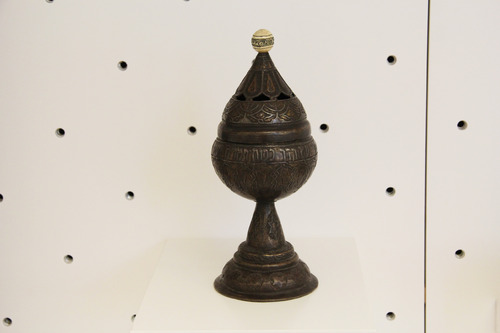 Etrog Container, Bezalel. This etrog container was made at the Bezalel Academy in Jerusalem, which institution was founded with the intention of creating true Jewish art. Its material, form, and decoration are the result of a conscious choice formed by the founders of the Bezalel Academy with the intention of creating Zionist art. Both shape and material are following the Middle Eastern traditions. The material is made of copper inlaid with silver, the main decorative elements are menorahs, fashionable tendril patterns of the era, and Hebrew letters. Made in the 1920s. 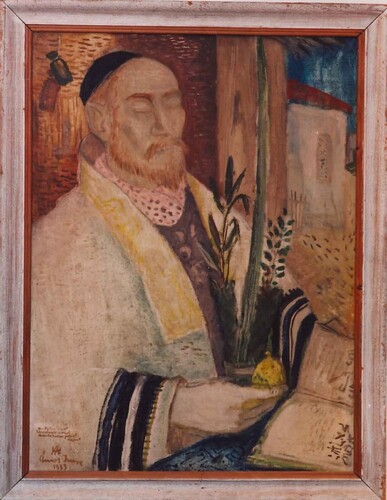 Imre Ámos: Festival of Booths. The painter of the picture was born as Imre Ungár in Nagykálló in 1907. He changed his name to Ámos in 1934, as a reference to the biblical prophet. From 1931 he exhibited at exhibitions, and in 1937, in Paris, he met Marc Chagall, whose influence is palpable on his works of art. Imre Ámos died at a very young age, in 1944, in a German concentration camp. In the painting called “Festival of Booth” you can see his grandfather with the festive Sukkot bouquet in his hand. The festive bouquet consists of four different plants; each piece can be compared with the children of Israel. Etrog has both a pleasant scent and a pleasant taste, so useful and pleasant at the same time, just like a Jew, who has both knowledge of Torah and good deeds. The palm tree reminds of those pious people, who has no knowledge of the Torah but are useful members of the community. The date, the fruit of the palm tree is though tasty, but has no scent. The scent of myrtle, however, is not associated with any flavor, so those Jews are of no use, who show off their knowledge just as decoration. And finally, like the willow branch, there are those, who do not stand out neither at practicing good deeds nor in knowledge. And yet, all of them complement each other to form a whole community, as the plants of the festive bouquet. 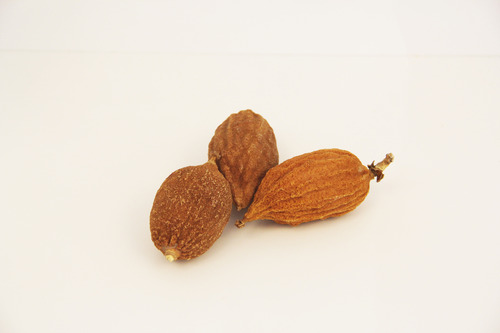 The symbol of Sukkot is the sukkah covered with reed and a closed frond of a palm tree, consisting of four species. Rapidly dying organic matters are not fit for display in a museum, with the exception, however of the etrog which is part of the bouquet. The etrog, which is a yellow citron representing learned and observant Jews, does not disintegrate, it simply withers and dries out. These etrogim are a reminiscent of past Sukkots.

← Shavuot
Torah and its commentaries →
Sukkoth