Every Friday evening and on the eve of Jewish holidays we light at least two candles. Candles are lit on the table where the festive dinner is to be served. Prior to eating, the Kiddush, a blessing is recited over wine to sanctify the Shabbat and Jewish holidays. The Kiddush is recited standing, while we watch the candles placed on the table, and ultimately drink from the Kiddush cup sitting. 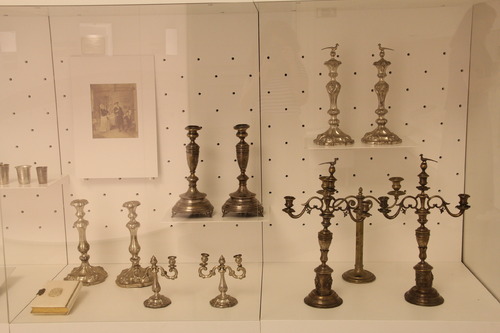 Candlesticks. ’It wasn’t the Jews that kept Sabbath, it was Sabbath that kept the Jews’ says the old Jewish saying. According to the Jewish calendar, Shabbath starts Friday evening, when we can see the first star, and it lasts until the next evening. Friday night the matron opens the Sabbath with lighting a candle, the householder greats it with a kiddush. It is typical to light two candles on Friday. The shape of the candlestics can be different, typically they don’t differ from the averidge candlestics, maybe we can spot an inscription which refers to the ritual usage.

A series of lithography by Moritz Daniel Oppenheim entitled “Pictures from the Life of a Jewish Family” appeared in 1865-1880 portraying idealized genre paintings of a much earlier era. The popularity of these pictures is attributable to the same reason as the foundation of the first Jewish museums: a nostalgic longing of urbanized Jews to preserve something of a disappearing world. 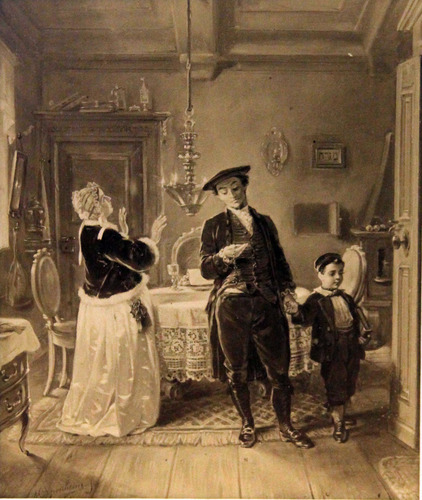 Moritz Daniel Oppenheimer: Sabbath Anfang, 1866 The picture (among many other artifacts in this exhibition) was originally published int he installment: ’Pictures from the Jewish family life.’ The fashionable, assimilant Jewish families of the biedermeier age canbe seen ont he pictures, from more than half century ago. These pictures convay a nostalgic message and atmosphere at the end of the 19th century, since they portray a vanishing traditional Jewish household. These pictures were used in several manners: they were published in gift galleries, cheap prints, and also on postcards which were considered the novelty of the time: thus also reached territories and families, that would not have been possible else. 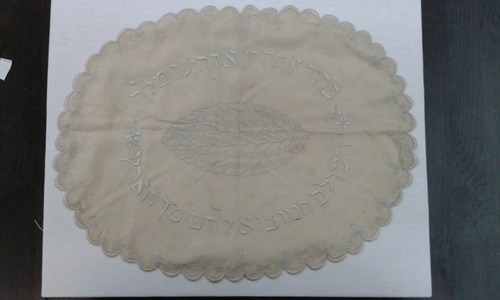 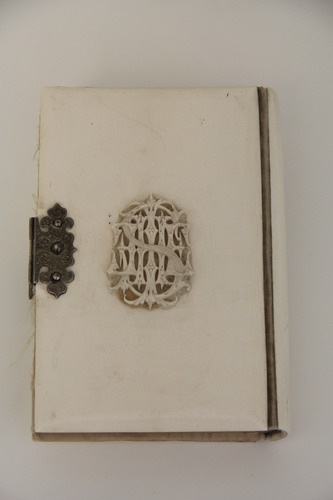 Prayer book in a bone-cover with a cover.

The Kiddush cup and the candlesticks are important requisites of the festive Shabbat and holiday table. These objects usually do not differ from the commonly used objects; what make them Judaica, Jewish ceremonial objects, are the Hebrew inscriptions, if any, and the miztvot,performed during their use. 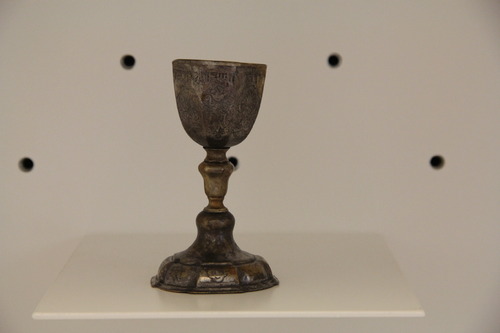 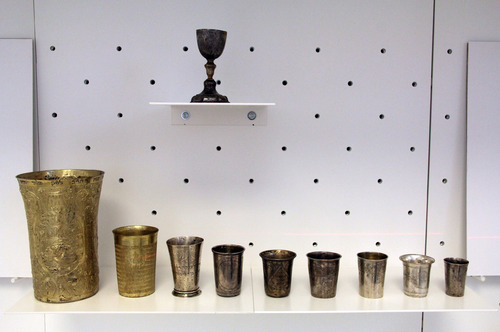 Kiddush cups. The blessing of the bread and the wine – kiddush -, is a crucial part of the Jewish community and family rituals. The family festivals are introduced by the kiddish, just like the feasts and commemorations of the community. The wine for the kiddush can be poured into a decorated goblet, a stoop or a simple cup. The rule only prescribes te minimal ampount of wine fr the blessing, the rest can be modified according to the need and possibility of the users. The goblets used at community kiddush are usually ornamented and expensive, since they symbolize the inner directive of the community to glorify and consummate the commandments. 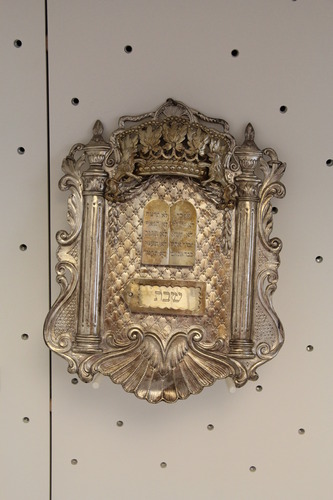 During the service in the synagogue, a shorter or longer sequence is read out loud on every Saturday, called the weekly sequence. In the traditional documents even the date is signed with the name of the weekly sequence. The exhibited Torah armor is to sign the Torah-roll part which to read on Saturday. 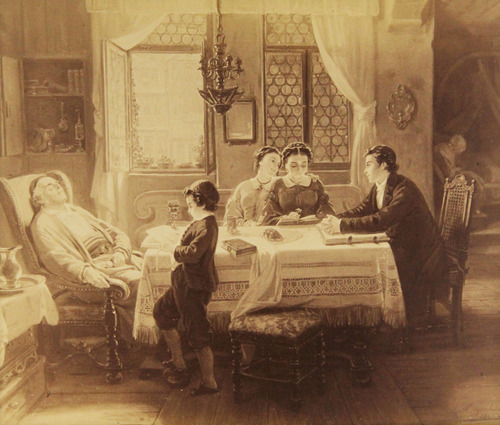 Moritz Daniel Oppenheimer: Saturday afternoon. On the nostalgic picture we can see a traditional, calm family Sabbath. The family is reunited, the householder is resting in an armcher, talking to his son. We can see a book in front of the young boys and girls, most probably they are scrutanizing holy texts. In the furniture of the room we can recognize many objects that we can also see int he exhibition. 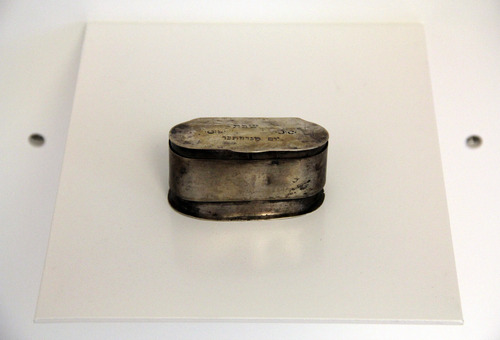 A snuff etwee with the inscription: ’Sabbath is a day of our calmness’ The strictest holiday, and the lack of work is part of celebrating the Sabbath. Every work which belongs to the work days, is forbidden to do on Saturday. On Saturday it is forbidden to prepare food, to wirte, to travel, to light a flame, so smoking also. When smoking became popular int he 18th-19th Century, it was common to sniff snuff on Saturday, which as a type of smoking possible to enjoy without lighting a fame. 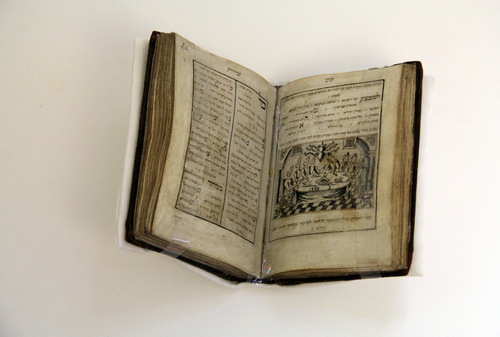 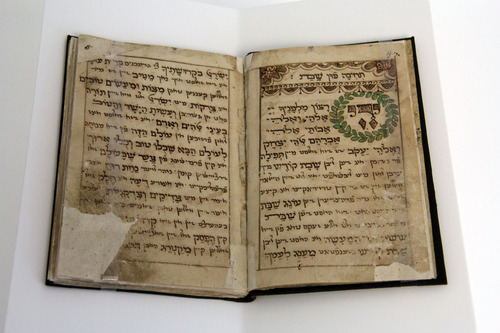 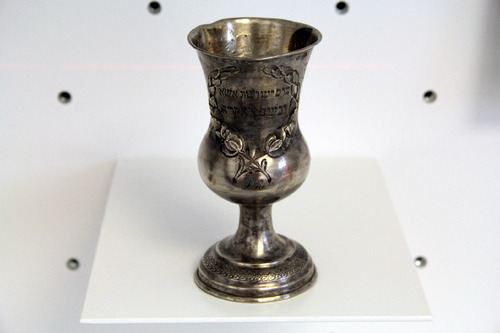 A goblet for the Havdalah ritual, Vienna, 1859. The end of Sabbath (Havdalah) is at Saturday evening, when Saturday is devided from the upcoming work days. The householder holds the goblet, the etwee with ointments or the spice boksz with a tower shape and the Havdalah candle after each other, saying a blessing for each. The spice box represents the end of the Saturday feast, the six-pointed, colourful, spun candle signes the dissolve of the Saturday holiday, and the start of the week. 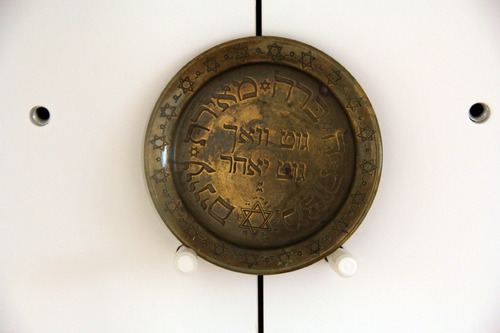 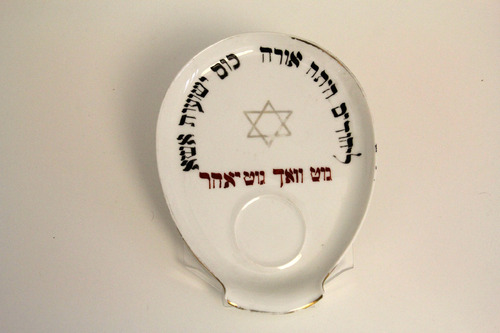 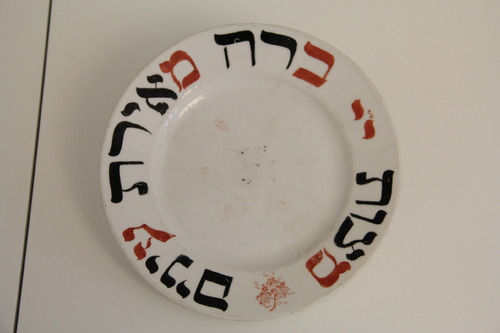 The spice boxes used for the Havdalah ceremony when we take leave of Shabbat are usually tower-shaped. In the Shabbat liturgy, tower appears as the symbol of divine power and help. The physical appearance of spice boxes often follows the typical architectural elements of the relevant region, quite often the towers of public buildings and even churches. 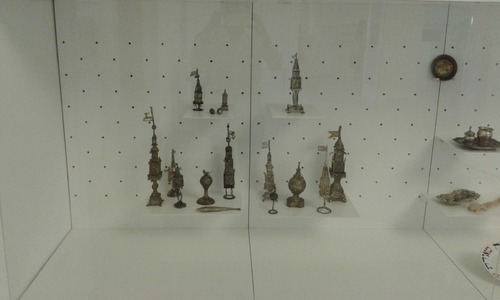 According to the Rabbinic legends every Jew gets an extra, special soul (neshamah yeterah) from the entrance of each Sabbath until its termination. This additional soul leaves the body at the end of the Shabbat, which makes one sad and especially feeble. The ceremony dividing the Shabbat from weekdays is called Havdalah, which means ‘separation’ in Hebrew. “Blessed are You (…) who separates the holy from the secular, light from darkness, Israel from the nations, the Shabbat from weekdays.” The ritual consists of blessings recited over wine, candle-light and spices. The spices are sniffed: their fragrance is supposed to remind us of the sweetness of the Shabbat and comfort us for the departure of the additional soul. The spices are held in a small spice box, which is shaken, sniffed and then passed on. Anything can serve as a spice box as long as the fragrance of the spices can be enjoyed. There are spice boxes in the form of fruits, fish, birds, train, boat and many others. The most widespread form is that of a tower. A possible reason for the popularity of this form might be that the tower is mentioned several times in the Shabbat liturgy with a positive connotation, as the symbol of divine power and assistance.