Passover, or Pessah in Hebrew, is a spring holiday celebrating the exodus from Egypt; it is a commemoration of its historical events and divine miracles. In the Diaspora, the holiday lasts eight days, throughout which it is forbidden to eat leaven. Therefore, a symbol of the holiday is unleavened bread, called matzah in Hebrew. The holiday starts with the Seder night; in the Diaspora, there is a Seder on the first two nights of the holiday. Seder means ‘order’ in Hebrew, and in fact, there is a set order of events during the Seder. There is a book called Haggadah, which is basically the script of the evening, it sets out the order of the Seder: the retelling of the historical events, various related stories and parables, prayers to be recited, songs to be sung, and the various symbolic items of food that have to be eaten in a set order – all of which are to remind the participants of the Seder of the slavery in Egypt and the salvation thereof. The Seder plate is a traditional ritual object used on the Seder. On the Seder plate, there is a special place for each symbolic food to be eaten. 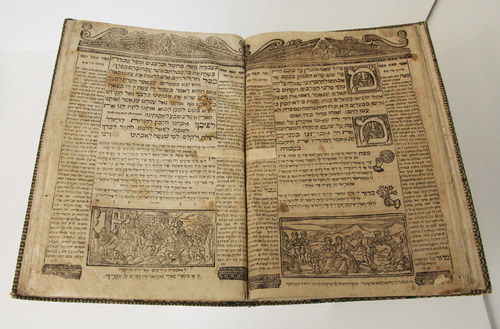 The Venice Haggadah, 1609. The eight-day holiday of Pesach starts with Seder night, held on the first two nights. Symbolic ritual items of food have to be eaten in a set order, which are reminders of the Egyptian bondage and the flight to freedom. There is a book called Haggadah, which is basically the script of the evening; in addition to the retelling of the historical events, it includes various related stories and parables, prayers to be recited, songs to be sung. The Haggadah has the most editions among published books in the world; the first printed versions appeared prior to 1500, in the era of incunabula. The Venice Haggadah is the first type of haggadah that besides the full text contains illustrations made of woodcuts. 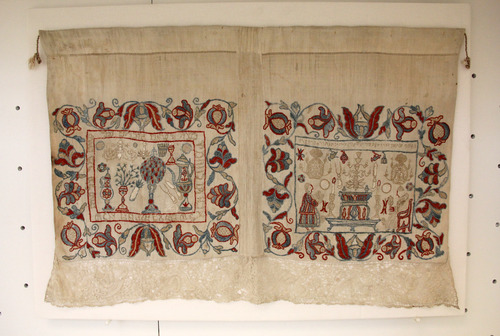 Cover for Seder Plate
In Jewish ritual tradition, bread – the braided bread eaten on the Shabbat and on holidays called hallah, as well as the unleavened bread eaten on Passover called matzah – has to be covered until its blessing is recited. This cover for the Seder plate is made out of linen, and is stem- and flat-embroidered with red, blue and beige silk thread. It is a nice example of cultural exchange and influence. It consists of two separate pieces, which were sewn together at a later date. On the piece on the right hand side, there is a scene from the Seder night, and on the left hand side, there are symbolic objects of the festive meal. The inscription above the picture on the right names the owners of the textile: Yoel Samuel and his wife, Yakhet. On the picture on the right hand side of the textile, the head of the family is sitting at the head of the table with a goblet of wine in his hand; he wears the kittel, a white robe used as burial shroud by Jewish men, which is traditionally worn on the Seder as well. His wife is standing, and from her hand motion it is obvious that she is just lighting the festival candles. On the table, there is a tiered Seder plate. Above the table hangs a Judenstern, a brass lamp in the form of a six-pointed star, which was traditionally used in Jewish households. There are two more lights on the wall in the picture. The pictures on both sides of the textile are framed in a domestic embroidered garland with pomegranates and tulips.
This type of embroidery became widespread in the seventeenth century, during the Turkish occupation of Hungary, first in noble mansions, and later on also in simple households. This cover for the Seder plate with the picture of the Seder and the garland with pomegranates and tulips dates probably from the early eighteenth century. 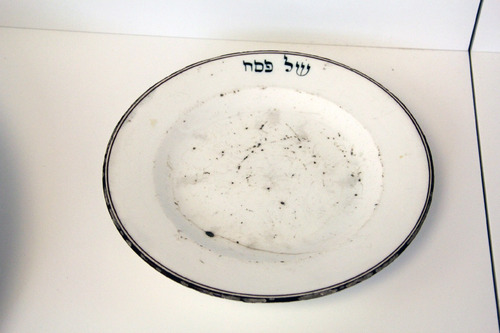 Plate for Passover. During Pesach only unleavened bread and food can be eaten. According to a long tradition of centuries even before Pesach the house has to be cleaned from unleavened food (chometz) and from everything that could have been in contact with leaven. During the holiday, a separate set of tableware is used. In our collection a memory from such a set is a plate made of earthenware with an inscription of ‘Pesach’. 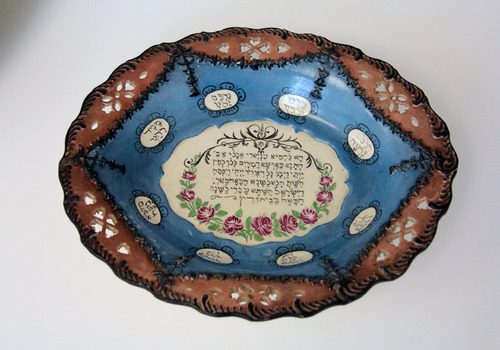 The Seder plates are the traditional objects used on Seder night meals. On the Seder plate, there is a special place for each symbolic food to be eaten. The relatively small Seder plate was made in Herend, in 1840. In the center of the plate part of the text of the Haggadah can be read (Ha Lachma Anya) where it is first explained in the course of the evening, that the matzah, the bread of bitterness reminds of the Egyptian bondage, the exodus and the freedom. 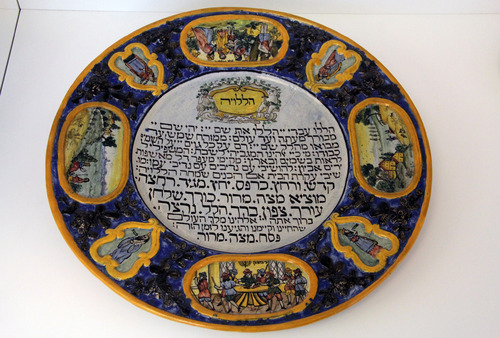 Seder Plate. The enormous tinned majolica was made in Ancona, Italy in 1654, according to the mark at the bottom. There are citations of psalms in its well and a list of the phases of the Seder evening rituals. On the rim, figures of Moses, Aaron, David and Solomon can be seen together with two Biblical scenes: Joseph is sold by his brothers and Isaac blesses Jacob. Similar bowls are known; on some the printed versions of Haggadah illustrations have been adapted. During their analysis it was revealed that these bowls were counterfeits, made around 1900, which were placed in various Jewish collections established at that time. 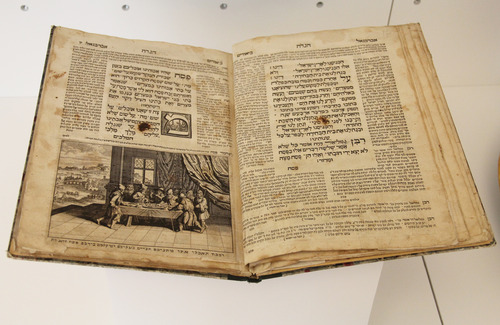 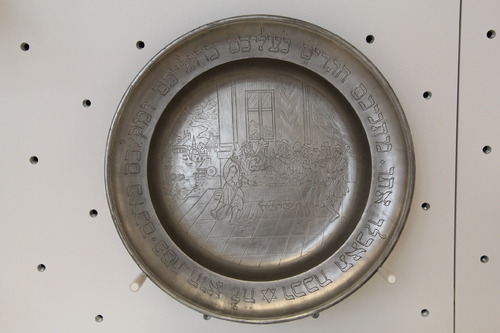 The center of the Seder plate contains an engraved Seder scene that is taken from the Amsterdam Haggadah. Around the rim of the pewter dish runs an inscription from the second book of Moses that well fits the illustration (Exodus 12:11): “And thus shall you eat it: with your loins girded, your shoes on your feet, and your staff in your hand; and you shall eat it in haste: it is the Lord’s Passover.” 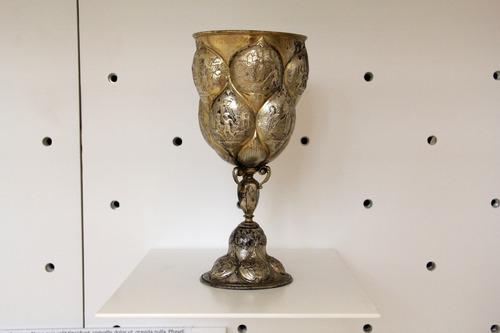 Goblet. The scenes of ten plagues of the Bible are visible on gilded silver goblet, made in the 18th century. There is also a quote from the Haggadah inscribed on the brim in Hebrew that says: “These are the Ten Plagues that the Holy One, blessed be He, brought upon the Egyptians.” 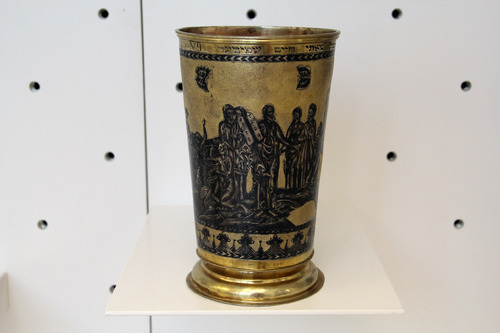 Cup. The cup made with niello technique, in 1804, in Moscow depicts scenes from the life of Moses. 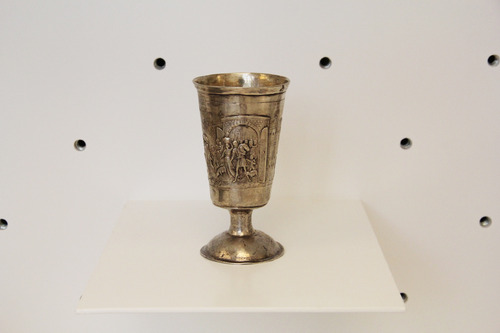 Goblet for Seder night with scenes from the exodus from Egypt. 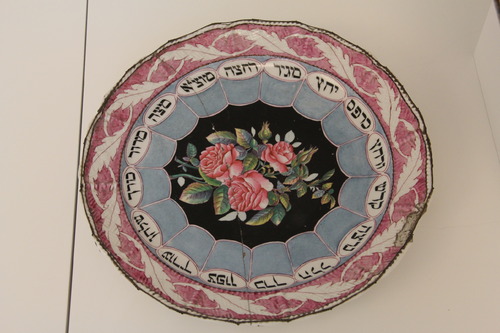 Seder plate, porcelain. This plate was made a few years later than the plate number 2.1.4. also in Herend, in the porcelain manufacture founded by Mór Fischer. Some Seder plates were also made in the world-renowned factory manufacturing primarily luxury tableware and ornaments. On the rim of the hand-painted plate the phases of the rituals of the Seder night can be discerned. 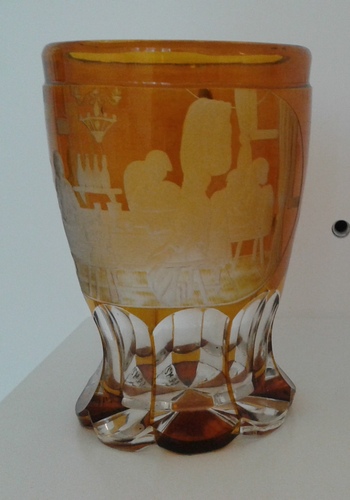 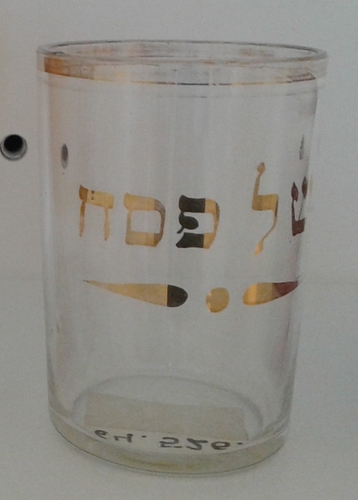 Glass cup for Pesach, inscription of "shel Pesach"/ “for Pesach”. 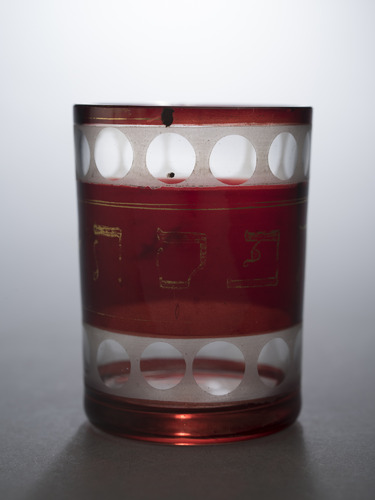 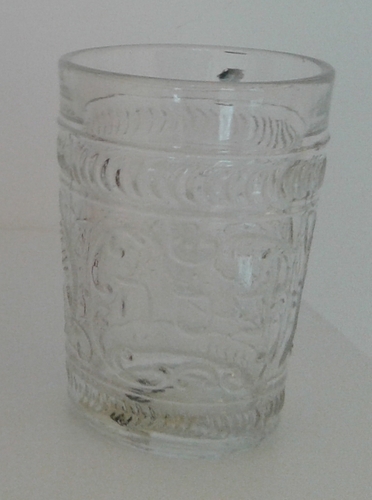 Glass cup for Pesach. The very simple, pressed glassware was sent to the Museum by a Jewish soldier from a World War I front. 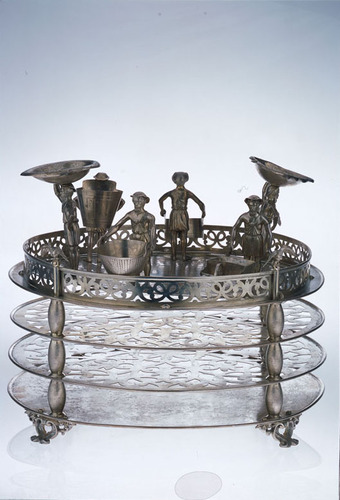 Silver Seder plate, Vienna, late 19th century. This plate was used at Seder nights by a wealthy Viennese citizen. The three-tiers are for the three unleavened flatbreads (matzot) to be placed separately on three levels. On the top of the plate the figurative figures holding symbolic foods evoke the slavery in Egypt. 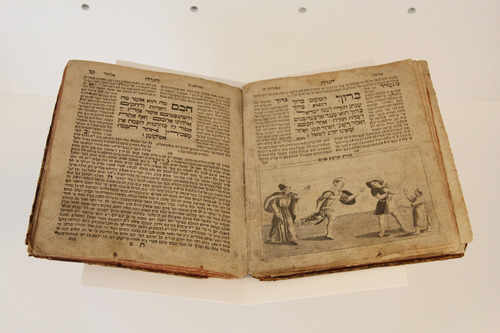 The Metz Haggadah. The Haggadah, published in 1767 in Metz, was the first release in a French-speaking region, which took over the images of the Amsterdam Haggadah. On the page to which the book lay open the representation of the “four sons” can be seen; they principally represent the four types of students: the wise, the wicked, the simple and the one who does not know how to ask. The four figures present in this Haggadah are taken from various pictures. 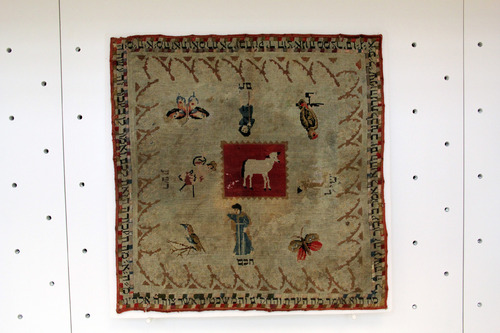 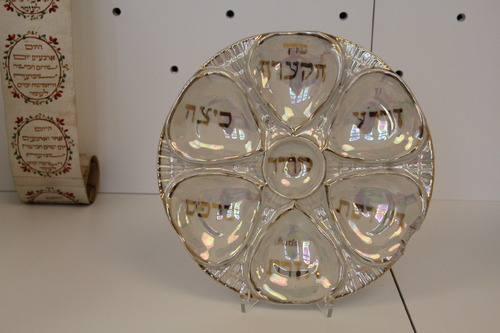 Seder plate, Karlovy Vary, around 1920-1930. The popular Czech bathing resort was also popular among Jewish visitors. Souvenir distributors in order to satisfy the Jewish visitors needs retrofitted their plates, which were originally designed to serve oysters and by adding appropriate Hebrew inscriptions they turned them into Seder plates. 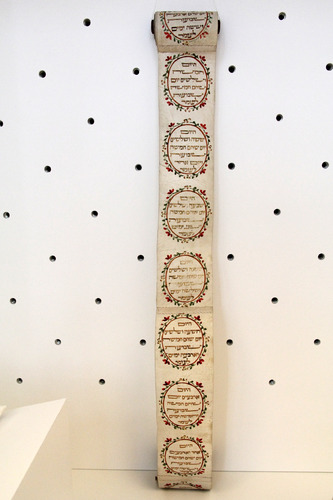 Omer counting roll. This is a small parchment roll with forty-nine oval medallions, each with a painted frame of flowers. Inside each medallion is the number of the days and weeks of the Omer. After the holiday of Passover, seven times seven, that is, forty-nine days have to be counted until the next holiday, the ‘Holiday of Weeks’, or Pentecost, called Shavuot in Hebrew. These are the days of the Omer. The counting of the days is a Biblical commandment. It dates to the times of the Temple in Jerusalem, when the harvest and sheaving of barley started on the second day of Passover, and on every day a sacrifice containing an omer-measure of barley was offered in the Temple. This ancient feast of wheat harvest gained a spiritual content in the Biblical narrative: according to tradition, Moses received the Torah – that is, the Oral and the Written Law – on Mount Sinai on this day. The period of the counting of the Omer thus connects Passover, which is the holiday of physical freedom from slavery and of becoming a free nation with the holiday of becoming a spiritual community. The counting of the Omer ends with Shavuot, the holiday of the Giving of the Torah, when the Jewish people received the Law and became obliged to remember common past, slavery in Egypt and the exodus. 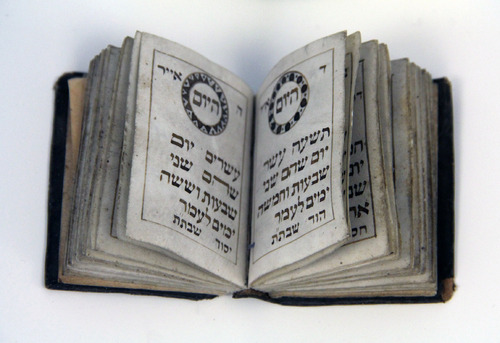 Omer counting booklet. Tradition holds that under Roman rule, there was a plague that killed many of Rabbi Akiva’s students. As a commemoration of this tragedy, the counting of the Omer is also a time of semi-mourning, during which Jewish law forbids music, dance, weddings, haircuts. An exception from this is the 33rd day of the Omer, called “Lag ba-Omer”, when all this is permitted. 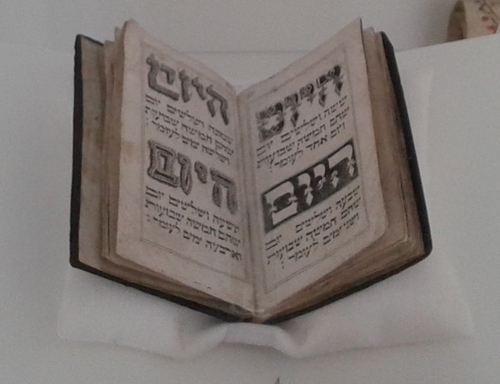 Omer counting booklet. Marcus Donath (Mordechai Sofer) made the booklet in Nitra, Slovakia, in 1834. Its specialty is that every day is marked with other types of decorative letters.